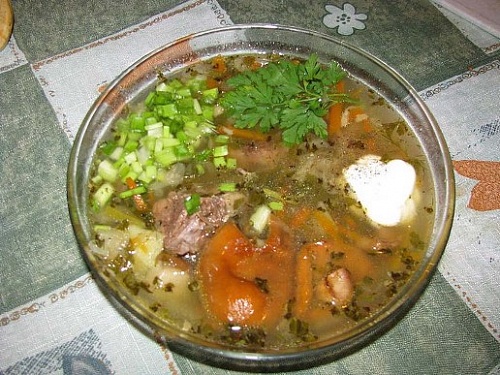 Schi took a special place among national soups. Historians suppose that this dish was known long time ago before Adoption of Christianity in the Rus! Once all soups were called Schi. Now Schi are cabbage soups. There are a lot of Russian Proverbs about schi: "Good wife is not the one who speaks well, but who cooks schi well".

Put meat in the cold water to make broth tastier. Bring to boil; Remove the grease and froth from the broth surface with a spoon. Cook at a low heat for I hour. Pour cold water in to keep the same quantity of broth. Add chopped carrot, shredded cabbage, salt. Bring to boil again. Then add potatoes cut in cubes. Chop onion, parsley root, turnip, tomatoes finely and fry in the pan with fat. Put everything in the pan and boil at a low heat for 30 minutes. Five minutes before finishing, put pepper, salt, 2 bay leaves. Schi is served with sour cream, fresh bread or pies.

700 g meat with bone, 2 l water, 700 g cabbage, 2 average potatoes, 1 little turnip, 1 large carrot, 2 fresh tomatoes, 2 tb fat, 1 onion, 1 parsley root, parsley, pepper, salt. Tastes change, but love of Russians towards Schi is eternal. Schi was eaten in tzar mansions and in poor houses as well. The only difference is that poor people had "empty schi", without meat where the base was cabbage and onion. Schi was the principal meal in monasteries.

Russian man couldn't live a day without schi. It was testified, that Russian men got so accustomed to schi that soldiers, being in France during the war 1812, pickled grapes leaves and cooked schi with them.