The country of the active volcanoes and geysers, hot springs, salmon and RED caviar, вЂњedge of the EarthвЂќ, the unknown world of wild nature and animals always attracts the lovers of exotics and adventures!

ALL OUR PROGRAMS IN KAMCHATKA ARE SUITABLE FOR USUAL TOURISTS, JUST LOVING WILD NATURE AND ACTIVE WAY OF LIFE.

ALL OF THEM ARE CONSTRUCTED OF SOME SEPARATE "BRICKS" WHICH CAN BE REPLACED, MOVED AND IT IS POSSIBLE TO CONSTRUCT YOUR OWN ITINERARY.

HERE WE REPRESENT SOME INFORMATION ABOUT KAMCHATKA

After the World was created it seems that Mother Nature felt another creative urge. It is a pity that no one will ever suspect the fantasies required of her. And then she created Kamchatka.

It's not our job to judge how real legend is. But all serious scientists and researches during the last couple of centuries who have worked on Kamchatka research agree about one thing: this peninsula is a unique ecological museum under the open sky created as a gift to humanity.

Kamchatka is without exaggeration one of the most spectacular regions in Russia. It occupies the area of 470,000 sq. km, which equals the size of France, Belgium and Luxembourg combined, and separates the Sea of Okhotsk from the Pacific Ocean. One should not confuse Kamchatka with Siberia; this name is used for the peninsula itself and the closest part of the continent, including Karaginsky Island and the Komandorsky Archipelago.
The mountain ridges - Sredinny, Valaginsky, Ganalsky and Kumroch - stretch from the north to the south giving the peninsula the shape of a giant fish. There are more than 160 volcanoes on the peninsula (29 of them are active), due to the fact that it lies on the Great Pacific вЂњring of fireвЂќ.

Volcanoes and volcanic peaks, cyclones and underground heat created here a mixture of twenty climate zones and a great variety of flora and fauna which are separated from each other sometimes only by a few hours of driving or even walking. But the main attractions of Kamchatka are volcanic calderas, stone sculpture вЂњparksвЂќ and lakes in craters, geysers and mineral springs, all in pristine condition.

Maybe in some way Kamchatka decided to comfort people living in this territory for their isolation from the rest of the continent by creating a microcosm of different climatic conditions as well as the flora and fauna of Asian Russia. In any case tourists who decide to travel through Kamchatka should prepare themselves for a variety of weather surprises and bring an unusual selection of clothing.
For example, at the end of June in the North of the peninsula you will walk on snow. In the East in a single day you can experience midsummer heat and autumn rain. At the same time, in the central part of the peninsula you will be charmed by summer warmth, blossoming bird cherry trees and high meadows and grass. In Petropavlovsk-Kamchatski during a walk on the Avachinskaya Bay you will be freshened by sea breeze. Lovers of mountain skiing will find exotic runs here and will acquire a beautiful suntan. So please pack in you suitcase everything from a swimsuit to a warm jacket for all seasons and their pleasures. In describing winter travel in Kamchatka one of the popular topics is a blizzard. We need to admit that those blizzards are really for lovers for all sensations, people who would like to test themselves as penguins - for snow and wind. Well Kamchatka gives you sun no less generously than snowstorms. It compares with the average amount of sun hours in most popular resorts. 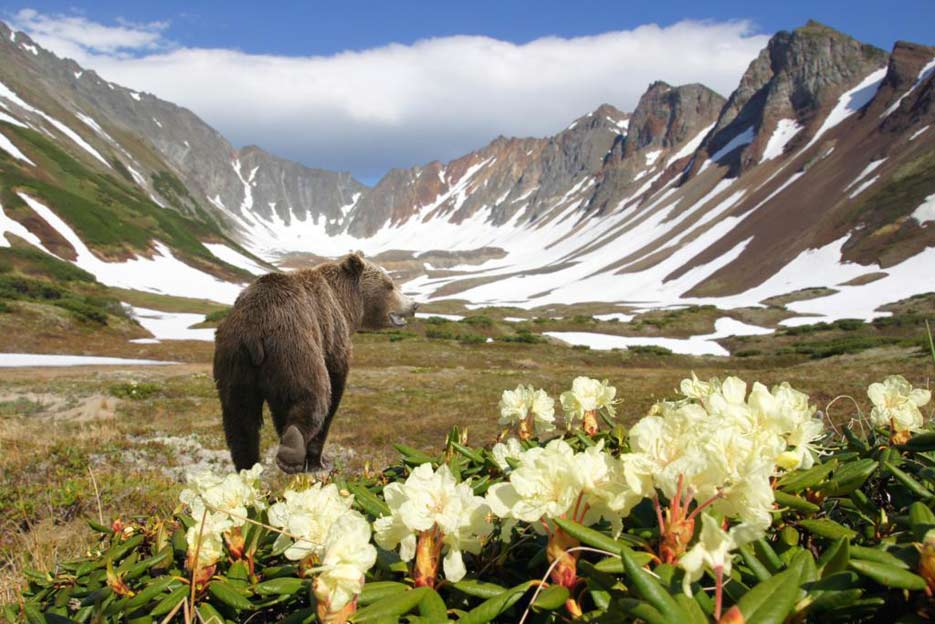 Kamchatka is the land of mountains and river valleys, lakes and volcanoes, abundant wildlife and vegetation. The stems of giant grasses covering the big areas in July and August can reach more than 3 meters in height, many of them are edible. The ancient natives used to make salmon stew with more than 20 different species of green herbs, which are also good in salads. The abundance of wild berries of different kinds is amazing. The forests, composed of stone-birch trees, cover hills and mountains of Coastal Kamchatka areas. Under the strikes of sometimes furious Pacific cyclones, the trunks and branches of these trees are shaped in fantastic curved figures twisting like the bodies of frozen snakes. The marsh cedar and willow cover the whole fields by their thick bushes stretching sometimes for many miles.

The fauna of Kamchatka represents about forty species of mammals, and little more than two hundred bird species.. Some species occur in unusually large numbers. For instance, the population of brown bears on Kamchatka, about 10,000 individuals, is the largest in Russia, and the bear itself is smaller only than the Aleutian Kodiak bear and the North American grizzly. Foxes and sables thrive in the forests. The Kamchatka snow can be observed here. There are a great many hares, ermines, and ground squirrel. Steller's sea eagle is the largest bird on Kamchatka. The various different salmon species, of course, are the true wealth of the peninsula and the population's economic mainstay. This account of the fauna of Kamchatka would be incomplete without some mention of those creatures, which are not found on the peninsula. There are no poisonous spiders, no snakes, frogs or toads. The total absence of reptiles is a mystery to zoologists and a piece of good fortune for the inhabitants; snakes living in the cover of such dense, tall grasses would be a great nuisance.

SOME OBJECTS, visited in our programs:

Gorely and Mutnovsky volcanoes are situated on the South of Petropavlovsk-Kamchatski, appr 150 km far from it.

Gorely. A massive shield volcano 1830m high. Massive andesite lava accumulation in the Early Pleistocene was followed about 33 thousand years ago by production about 120 km3 of ignimbrite accompanied by caldera collapse. Basalts and basaltic andesites then created five volcanoes that coalesced to form of the modern mountain between 8000 and 6000 years ago; this largely filled the caldera, but sections of the old caldera walls remain visible just outside the shield. Subsequent activity has been on a reduced scale, producing both lava and these are exposed in the walls of the summit complex of craters. Recent eruptions have been explosive; in 1981 ash covered an area of 500 km2, and the last eruption was in 1986 when the cloud of steam and ash rose 600m. Read more...

Gorely Volcano, near the top.


Mutnovsky. A complex of four superimposed volcanoes with a summit of 2322m high. Each cycle of activity produced a large cone, before dying and being followed by another whose center was shifted; it is largely formed of basaltic andesires, with a high proportion of more acidic pyroclastics.

Mutnovsky #1 formed about 45 thousand years ago; its caldera is now eroded to open out on the north side of the mountain. Mutnovsky #2 grew to the south in the Late Pleistocene, collapsed in a caldera, and then grew a new cone that forms the present summit. Mutnovsky #3 produced basalts and differentiated dacites and rhiolites (as about 35% lavas and 65% pyroclastics with included lahars), in between the cones of #1 and #2; its huge caldera contains the active fumarole fields that are partly overrun by its own glaciers. Mutnovsky #4 is a small crater in the edge of the #3 caldera, and is also filled glacier ice. The active crater also lies in the rim of the #3 caldera; it last erupted explosively in 1960, and still contains powerful fumaroles. The last volcano eruption took place in April 2000. Read more...

Avacha. Avachinskiy volcano (in a group with Koryakskiy Volcano)
An active conical stratovolcano 2741m high. A large early cone of andesites and basalts collapsed in stages into a caldera 5500 to 3500 years ago. This has been now almost completely filled by a younger cone, largely build of pyroclastics but with the fronts of basaltic andesite lava flows sticking out around its base. The central crater has produced 14 historical eruptions. A powerful vulcanian eruption in 1945 left the crater 250m deep and 330m across. The most recent eruption was in 1991, when lava filled the crater and overtopped the rim to produce a flow a kilometer long down the southern slop. This lava plug is still warm, and fumoroles and solfataras emerge round the margin of its dome within the crater; if past eruption patterns repeat themselves, the plug is likely to be removed explosively within the next few years. Gravity surveys shows that top of its magma chamber is only 2000m below sea level.
Locals name it "domestic" volcano, as it is just 30 km driving from Petropavlovsk Kamchatskiy and both Avachinskiy and Koryakskiy volcanos are visible from the city and it is like hallmark of Petropavlovsk Kamchatskiy. Read more...

Bystraya River is one of the most interesting and accessible rivers in Kamchatka. During the rafting the tourists cover the distance of 120 km The Bystraya River flows from the central Kamchatka Valley through the Central Kamchatka Mountain Range toward the Sea of Okhotsk. Beginning at Malki, the site of a locally famous hot springs and mineral water springs, float down the river about 40 km per day toward the Sea of Okhotsk to the Ust-Bolsheretsk Bridge, pass through the canyons of the Central Kamchatka Range and through lush birch forests. From late July through September many salmon and trout are in the river, making the fishing quite good. Wildlife to watch for include many waterfowl, the Steller sea eagle, and possibly brown bears.


VALLEY OF GEYSERS - HIGHLIGHT OF KAMCHATKA

The cluster of geysers, fumoroles and hot springs in this valley was only discovered in 1941. They lie above the marginal fractures of the oldest Uzon caldera. The hot water that emerges is largely re-circulated rainfall, mixed with some juvenile water from magma. The magmatic heat is probably the roots of the Uzon volcano, where ground temperature reach 250 C at about 500m depth the beneath caldera floor; alternatively, the Kikhpinich volcano maybe the heat source. The Geysernaya River has cut its valley in bedded andesitic that were deposited in a lake in the first Uzon caldera; the southeastern valley slope is a heavily eroded caldera wall, broken in to older volcano. Worldwide famous Valley of Geysers is belonging the Kronotsky National Reserve.

The Valley of Geysers meets you with streams of curling steam, smell of native sulphur and many-colored splashes of silver water. Your trip will start from geysers Bolshoy(Large) and Malyi(Small), then you'll see the geysers Fontan(Fountain), Dvoynoy(Double), Nepostoyannyi(Inconstant). The geyser Vorota Ada(Gates of Hell) strikes you by it's shape - two deep vents within one large crater, mysterious and threatening noise curls in from the Earth.