Meeting with Peter the Great / St.Petersburg 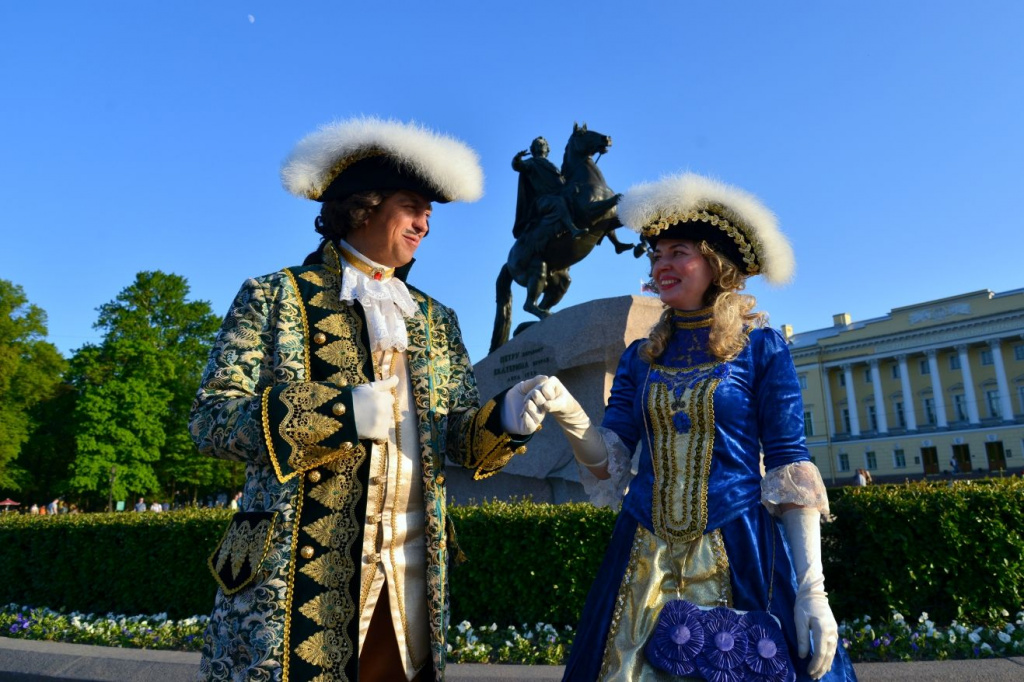 It is impossible to imagine the northern capital of Russia, the city of Peter the Great, without its founder and his wife - Peter 1 and Catherine 1. Everything in this city is saturated with the dreams of this emperor and inspired by his plans and ideas. When you come please do not miss the chance to be welcomed by the symbols of the city вЂ“ our emperor couple Peter and Catherine will greet you at the airport or the railway station and will accompany you during the dining or city tour and you surely will have a lot of fun and beautiful remarkable pictures as well. 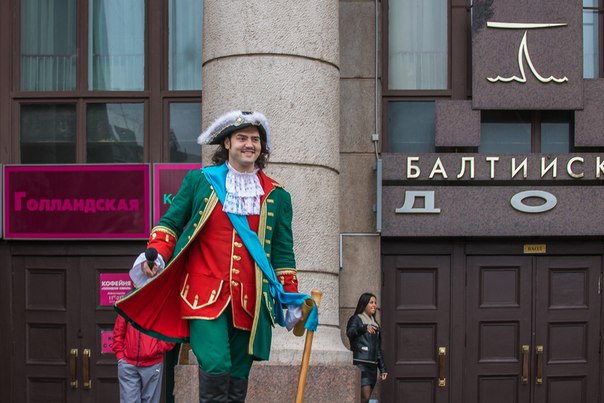 In the center of the Northern capital, more than two dozen animators work daily, dressed as Peter I and his wife Catherine. Many scold their importunity, someone is touched by the assimilation of the augusts, seeing them in line for food, and tourists adore them. One way or another, the couple of the founder of the city on the Neva and Catherine I - a business card of St. Petersburg.
Often actors from small theater groups dress up as kings and queens. Photo services against the backdrop of attractions combine with filming in the cinema and performances. In the post of "street" emperor, some are delayed for ten, or even 17 years.
To become Peter, in addition to the ability to persuade a tourist, you need to have the appropriate data - a growth of two meters, a Slavic appearance. A mustache can be drawn, but your own are welcome. Athletic physique is optional. The main thing is for the actor to freely feel вЂњin shapeвЂќ. The weight of some suits reaches 10 kg. The requirements for the actors are well founded.

You are probably curious to find out what Peter 1 and his wife actually looked like.
Peter I had incredibly high growth - two meters and one cm. Most accurately, his verbal portrait was made by artist Valentin Serov: вЂњHe was scary: long, on weak, thin legs and with such a small head with respect to the entire body, which is larger should have looked like some kind of scarecrow with a poorly set head, than a living person. There was a constant tick in his face, and he always вЂњcut facesвЂќ: blinked, jerked his mouth, drove his nose and clapped his chin. At the same time he walked in huge strides, and all his companions were forced to follow him in a run ... вЂќ

The description of CatherineвЂ™s appearance, coinciding with her portrait image, came to us: вЂњShe is small in stature, thick and black. Her whole appearance does not make a favorable impression. ItвЂ™s immediately noticeable that she is of low origin, вЂќwas the verdict of the German Countess Wilhelmina Bayretskaya. Catherine I (nГ©e Marta) possessed undeniable advantages: she could gulp a glass of the strongest vodka, loved living in an army tent, sleeping on a hard mattress. She was remarkable for her remarkable physical strength.вЂќ

The founder of St. Petersburg, Peter the Great, who was 348 this year, lives not only in the memory of citizens and tourists.
You can meet him and get a lot of impressions and beautiful photos reminding you of your journey to Russia.

Meeting with Peter and Catherine can be included in any program, as well as any excursion or activity can be accompanied by the emeror couple. Invite them to join you at the Gala dinner or greet and see off at the airport or railway station and be attended personally by russian zars!