The village of Zhostovo outside Moscow has become a symbol of unique folk art. For more than 150 years now many of its inhabitants have been developing the skill of decorating but one thing, trays. Their skillful hands have turned this household utensil into a work of art. Bouquets or garden and field flowers strewn against the black background adorn these trays, giving people joie-de-vivre and awakening admiration over the beauty and diversity of nature.

Zhostovo wares belong to the family of Russian lacquers, whose history goes back to the emergence of miniature lacquer painting on papier-mache in the village of Danilkovo near Fedoskino in the Moscow Region, in the late 18th century.

The first trays were made in Zhostovo in 1807, when Filipp Nikitich Vishnyakov founded his workshop. After he moved to Moscow, his brother Taras carried on the family business. Yegor Vishnyakov started the manufacture of papier-mache and metal lacquers in the village of Ostashkovo 2km away from Zhostovo in 1815, and Osip Filippovich Vishnyakov, whose name is associated with the flourishing of the craft, opened his workshop in 1825.

Every tray was usually handled by three craftsmen - a smith, who produced shapes, a spatler, who covered the tray with a layer of ground, and a painter, who did the painting. After the tray was dried, the ground-worker covered it with lacquer. In the beginning the workshop master and members of his family worked on a par with other employees.

As the Zhostovo craftsmen expanded production, they took account of and absorbed the experience of other tray-makers. They were prompted the idea of replacing papier-mache with metal, which was hardier, by trays from Nizhny Tagil, which had become a well-known production center way back in the 17th century. Those masters were making large trays painted from original canvasses or engravings. 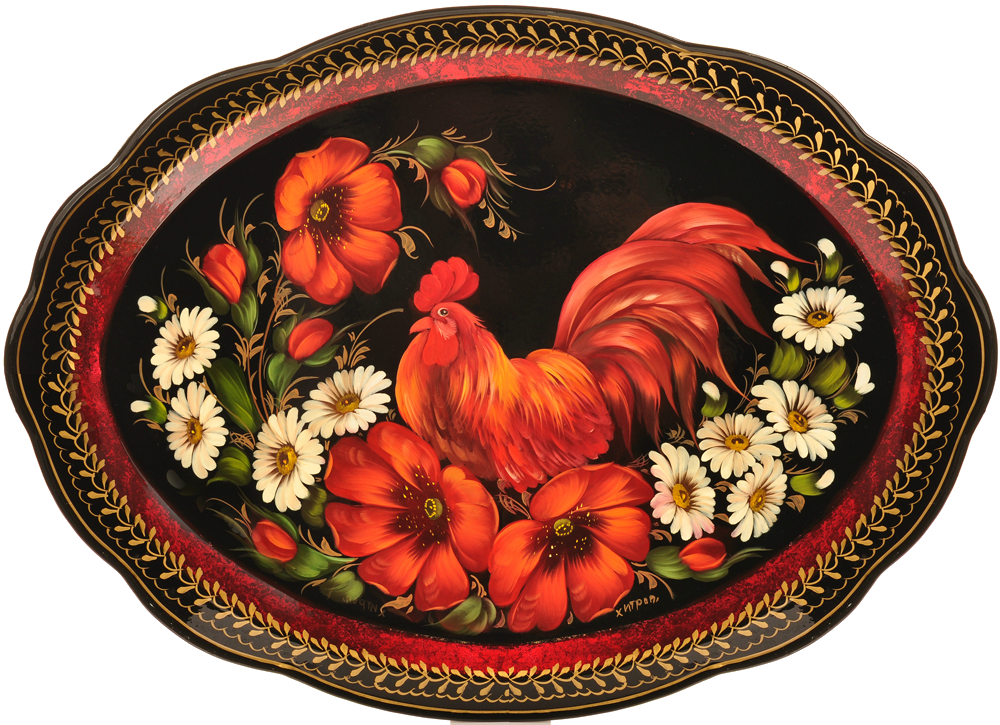 In the 1910s, Zhostovo tray-making, like many other folk crafts, was hit by a crisis. The demand for trays had slumped, and production was shrinking. Painters and smiths were leaving their workshops for farming or seasonal work. It was only in the 1920s, with the overall revival of folk crafts and the rebirth of artels across the country, that they reemerged around Zhostovo.

Zhostovo fell on hard times in the 1920s and 1930s. The tendency for the uncompromising assertion of modernity and realism that were common for Soviet art prompted the authorities in charge of the folk crafts to try to influence their traditional developmental trends and impose on the Zhostovo painters easel-painting and naturalist models of ornamental and thematic compositions that had been devised by professional artists without any regard for the specific features of the local craft. The leading Zhostovo painters understood that those innovations were alien to the very nature of folk art, so they effectively countered those new trends and infused new ideas into the traditional school of painting.

In 1940, the Fedoskino vocational school opened a department of Zhostovo painting to train young craftsmen. Two remarkable Zhostovo painters, P.Plakhov and V.Dyuzhayev, taught there for many years, the activity that was responsible for their emergence as original masters. They trained several generations of young craftsmen, who developed in their own way the Zhostovo painting traditions, and themselves represented two different, highly dissimilar aspects of the local craft.

Another stage in the history of Zhostovo craft started in the 1960s and continues to our day. Overcoming tendencies leaning toward easel painting and natural is in, tray painting has been gaining in prestige and popularity not only owing to large-scale output of serial works, but also owing to unique items that increasingly attracted public attention at numerous exhibitions both at home and abroad. Ever since its outset Zhostovo craft has been developed by several generations of craftsmen, who formed painter dynasties. It is being carried on today by the familial Belyayev, Kledov, Antipov, Saveliev, Gogin and Vishnyakov clans. Many of them have been granted the honorable title of the Merited Artist of Russia, are members of the Artists' Union, have been decorated with medals of the Academy of Arts, and have won diplomas and awards at numerous exhibitions of different levels. Their works are stored as a national treasury and exhibited by major national museums.

Excursion to Zhostovo can be organised by Tari Tour.
Museum+Procedure of painting on the tray will cost you 10 EUR per person (entrance and excursion).
Group is from 10 persons. Besides you need transport and guide/translator.