For more than 250 years Vladimir played a very important part in the history of Russia, when it was the capital of the ancient Russian state. Up to 1432, Grand Princes of Russia were crowned in the Vladimir Cathedral of the Assumption of Holly Mother of God.

The Golden Gate is the only existing monument of military engineering architecture of ancient Russia.

The gate was built in 1158-64, under Prince Andrey Bogolubsky. It was the main, most spectacular, and imposing gate of north-eastern Russia's capital. Such gates had been erected in big cities of the Christian world starting with the gate in Constantinople that commemorated the entry of Jesus Christ into Jerusalem through the Golden Gate of the city.

The great Assumption Cathedral, built in 1158 - 1160 by the order of Prince Andrei Bogolyubsky, has preserved world famous frescoes of Andrey Rublev. Not only was it to be the main church of the Vladimir-Suzdal principality, its cultural, political and religious center, but it was to become the main church of all Russia. In September 1164 a most worshiped icon of Russia - the Miraculous Icon of Mother of God - was brought into the cathedral. Since then the image has been called the Vladimirskaya Icon of Mother of God.

The Cathedral of St. Dmitry was built in 1194-1197 in the reign of Prince Vsevolod III who dedicated it to his heavenly patron St. Demetrius of Salonica. It used to be part of the buildings of the prince's court, and was one of the most beautiful and original cathedrals of ancient Russia. 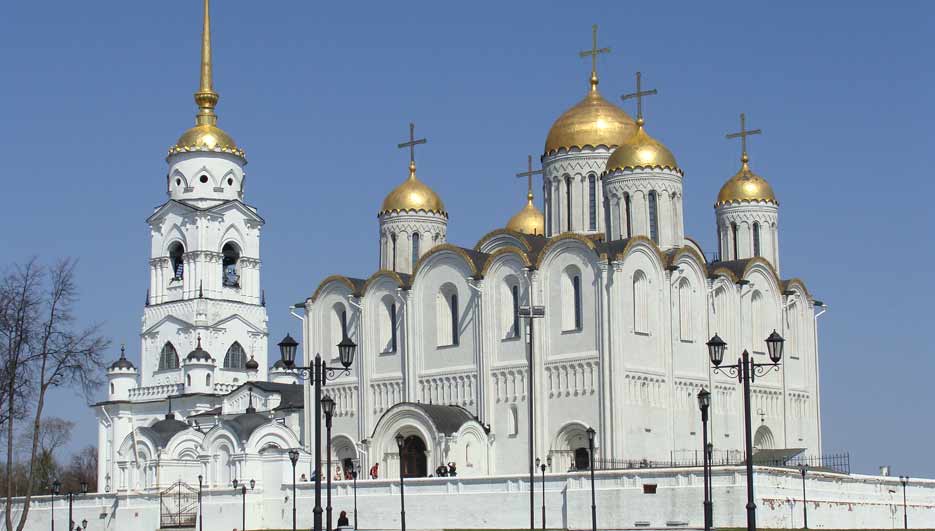