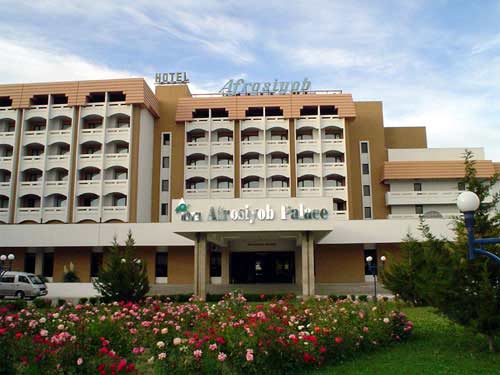 From November, 18 till November, 21st, 2004 company "FAN-Distributor" has organized annual conference for its partners. Conference has taken place in Samarkand, in Uzbekistan. All participants have been delivered by special charter flight from Moscow by airline "Trans-Avia". More than 140 persons - representatives of 116 companies from 78 subjects of the Russian Federation - took part in this conference. The friendly companies - the "FAN-Distributor", the Xerox Eurasia and Cisco Systems have been organizers of this event.

The basic events have taken place in the cozy and comfortable hotel "Afrosiab" located in the central part of Samarkand.

Evgenie Kolikov, director of the company "FAN-Distributor" has opened the conference. He welcomed all partners and participants which have arrived to Samarkand and has described the basic purpose of conference - presentation of the new company in the group of the companies "FAN" - the company "FAN -Distributor", and also has described in details the purposes and main goal of the new company.

As the most important thing the head of new distributor company announced that in 2004 company "FAN-Distributor" has obtained the status of the official distributor of equipment Linksys, known in Russia under the trade mark of company Cisco Systems. Since this moment the company "FAN-Distributor" except for a full spectrum of the equipment the Xerox will offer the regional partners the equipment for creation of wire and wireless networks, networks of an IP-telephony, converge systems of data transmission, a voice and video. So on so onвЂ¦

вЂ¦ The audience has appeared very active, questions has been set much and various, however main attention to such themes as use of new system of work of a site, the organization of work IP-technologies have involved, consulting, construction business of processes and systems of motivation.

During stay in the nice famous city Samarkand it was organized the set of interesting actions - entertaining show В«Acquaintance to the EastВ», the detailed excursion program with visiting all main places of interest of Samarkand and final gala performance В«Fires of UzbekistanВ» with participation of stars of the Uzbek rock group "Yalla " under conduction of their permanent leader Farukh Zakirov.

To freshen consistently in memory all the important, cognitive and cheerful events of the days spent by all of us together in Samarkand we show the program of conference.