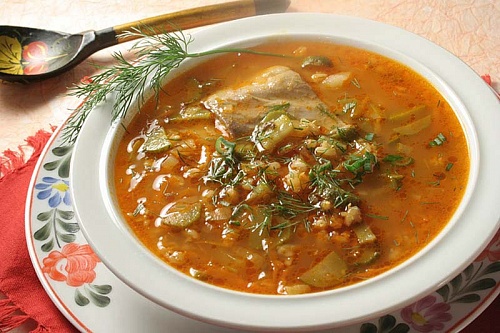 If you look at Russian Humanitarian dictionary to find word "rassolnik" you can obtain the following description: "Rassolnik" is a Russian soup with kidneys, pickles, onions, white roots, usually from grains or potatoes, sometimes without them, dressed with milk and eggs, sometimes with fresh cabbage. Pickles could be replaced with salted mushrooms.

This dish also came to us from ancient times, when it was called "Kalia" and was cooked with caviar, chicken, meat. Sometimes in the old days, cucumber pickle brine was replaced with lemon juice, but only the rich people could afford that luxury.

Finally, this dish was formed as Russian cuisine much later - only in the mid-nineteenth century. Around this time it was given a name of "Rassolnik". Although the use of cucumber brine as the basis for soups have been known since the XV century ..

The quantity of brine, the concentration and correlation with the rest of the liquid and mix with the other major products of soup (fish, meat, vegetables and cereals) were so different that spawned dishes with different names: kali, pohmelki, soups, and finally "rassolnik".

Rassolnik has a moderately spicy sour taste, and certainly less popular than 'Schi' or 'Borsch', but nonetheless widespread in Russian cuisine.

A portion of rassolnik is dressed with sour cream and chopped herbs.

But what is interesting - many years ago rassolnik was name of  no soup, but was name of pie stuffed with chicken and buckwheat, which was poured the brine and was added with boiled eggs. In today's cooks prepare "rassolnie" cakes in the form of closed boats and serve them with soup of the same name.

Cooking a delicious rassolnik is not difficult. It is enough to know some basic things.

Rassolnik can be cooked in different broths: fish, chicken, lamb, beef and pork. It is important that the meat is on the bone, and the fish - whole. After cooking fish or meat should be removed from broth, the flesh should be separated from the bones, cut and added at the end of cooking the soup.

Just the soup cooked with kidney is a bit problematic. Previously kidneys must be soaked for several hours, periodically changing the water, then boiled, the broth should be poured, and the kidneys are to be added to rassolnik at the beginning of cooking, sliced them into thin plates, cubes or strips. In the absence of by-products they can be replaced beef meat.

Grits for rassolnik should be selected depending on the meat products: pearl barley - goes to rassolnik with kidney and beef, rice - used to pluck the chicken and turkey, barley - is coming to duck and giblets, blackrice and rice - are for vegetarian rassolnik.

Strongly spicy greens, such as tarragon, cilantro, basil, are not in use for rassolnik. Flavor for rassolnik is usually parsley or dill.

Soup rassolnik certainly takes the salty cucumber, sometimes brine of cucumbers is added to the soup. In Siberia and the Urals for preparing rassolnik they take pickled mushrooms, often salty milk mushrooms.

Preparation of rassolnik various roots, including parsley root, can be used. The more roots, the more fragrant soup.