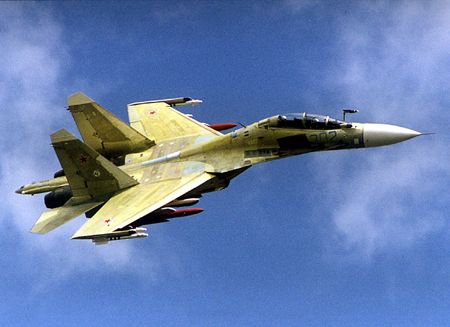 Russian supersonic planes and pilots are the best in the world!

You can feel yourself the best!

Prices for 30 min flight: - upon request

We should have all information about "tourist" not less then5 weeks before flights.

The MIG - 25 was designed as an all-weather high altitude supersonic interceptor. The Soviet Air Force needed an interceptor, which was able to fly at least higher and faster, than any other air plane and its task was to fight with the high speed US airplanes, such as XB-70 "Valkyrie" bomber and SR-71 "Blackbird" reconnaissance airplane. The first prototype of MIG - 25 lifted off in 1964, but till now MIG - 25 remains to be the quickest combat airplane, having set a lot of altitude, speed, and climb-up records. As the MIG - 25 was designed for flights at the 25-km altitude with a speed, which is three times higher, than a speed of a sound, it doesn't have such a high maneuverability, as the most of the lighter fighters MIG - 29, which were created for low-altitude aerial combat. However, legendary MIG - 25 "Foxbat" - is the only one airplane in the world, which will fly you to the boundaries of space, and then you will have the first-eye view, that the Earth is round, and sky is black.

The MIG - 29 is one of the advanced combat airplanes in the Russian Air Force. It was designed for gaining the air superiority. MIG- 29 "Fulcrum" aircraft was put into service in 1985. Being one of the most advanced airplanes in the world, it has turbojet engines, possesses an advantageous proportion of mass and power, an excellent aerodynamics and a wonderful view from the cockpit. All these above characteristics make the aircraft maximum effective in an aerial combat. Comparable on size and assigned tasks with the American F-16 and F/A-18 fighters, the MIG - 29 is presently in the service of 23 countries of the world.

The SU-30 - two-seat training-combat airplane was created on the basis of SU-27. It is one of the most sophisticated airplanes among the airplanes of Russian Air Force. Comparable on the size and design with the American F-15 fighter, the SU-30 was designed as a wide action range super-modern interceptor. Its shell is made of high-strength titanium and aluminum alloys. Being one of the most maneuverable airplanes in the world, SU-30 can fly with 9 g acceleration during aerobatic flying. The first SU-30 was put into service in 1987.

1. Flights are operated at the aerodrome near Nizhni Novgorod

2. Drive to and drive back takes appr 1,5 hours one way from Nizhni Novgorod city.

Whole trip can consist of 4 days

But of course it is recommended to visit some museums, related to avia technics and flights, like Museum in Monino, for example.