Laid out in the building of the Church of the Annunciation, the 18th century Necropolis
with the St Lazarus Sepulchre and a necropolis of prominent figures of Russian art,
the Alexander Nevsky Lavra's Necropolis can be regarded as a veritable Russian pantheon.

In the Lavra there are three cemeteries which were named after the churches erected there. These are the St Lazarus (Lazarevskoye) Cemetery, the Tikhvinskoye Cemetery and the St Nickolas (Nikolskoye) Cemetery.

Started in 1717 with the burial of Peter the Great's beloved sister Natalya, the St Lazarus Cemetery (the Necropolis of the 18th century) is the oldest one not only in the Monastery but in St Petersburg. It was intended as a burial ground for members of the Imperial Family and the court nobility, for prominent state figures and military commanders, as well as for outstanding personalities from the world of science, art and literature. Many representatives of noble families were also interred there. On their graves the magnificent tombstones and monuments of marble, bronze and granite were erected.

Many of them were designed by talented sculptors and architects such as I. Martos, M. Kozlovsky, A. Voronikhin, G.

In the 18th Century Necropolis one can see tombs of the famous Russian general of Peter I's time B. 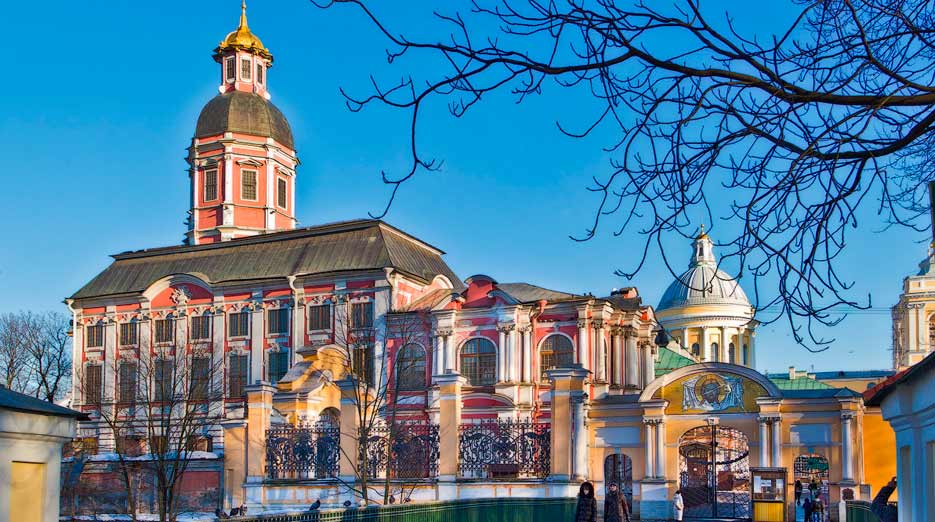 Sheremetyev, the commander of the cavalry in the Patriotic war of 1812 F. Uvarov, the great Russian scientist M. Lomonosov, the architects I. Starov and A. Voronikhin. In Soviet times the remains of the sculptors M. Kozlovsky, F. Shubin, I. Martos, the painter I. Borovikovsky, the architects A. Zakharov, C. Rossi, M. Thomas de Thomon and others were transferred there from other city's cemeteries.

The Tikhvinskoye Cemetery was founded in 1823. In 1935 it was made into a necropolis of eminent art figures. Here were interred Pushkin's contemporaries - the writer M. Karamzin, the poets V. Zhukovsky and E. Baratynsky and the fabulist I. Krylov. Later here were buried the composers M. Glinka, M. Mussorgsky, P. Tchaikovsky, A. Borodin, A. Dargomyzhsky, the famous writer F. Dostoyevsky, the renowned artists I. Kramskoi, A. Kuinji, B. Kustodiyev, the art and musical critic V. Stasov, the actresses V. Komissarzhevskaya, V. Michurina-Samoilova, E. Korchagina-Alexandrovskaya, and the actors Yu. Yuryev and N. Cherkasov. The tombstones were designed also by Soviet sculptors M. Manizer, V. Ingal, M. Anikushin, and others.

A special place in the Necropolis (including that of the St Nickolas Cemetery) was intended for burial of high church dignitaries (such as Metropolitan Nicodemus) as well as the Monastery's monks.

The Church of the Annunciation contains the tomb of Field Marshal A. Suvorov.