St. Isaac's was the main cathedral of the city from the time it was finished (1858) up until the October Revolution. The construction of it began in 1818 and lasted for 40 years!

The architect who created this miracle was August Montferrand commissioned from France by Nicholas I. He came to Russia when he was 30 and died being 70 the same month the cathedral was consecrated. So it was the work of his whole life indeed! The height of the cathedral is 101, 5 m. Its 72 monumental columns weigh from 64 to 114 tons each. From outside, St. Isaac's is faced with Finnish granite and richly decorated with bas-reliefs and sculpture. There are figures of the four Evangelists, twelve apostles and angels with lanterns on the roof. Actually St. Isaac's is the fourth biggest single-domed cathedral in the world after St. Peter's in Rome, St. Paul's in London and Santa Maria del Fiore in Florence.

The dome is gilded with 100 kilograms of gold. And St. Isaac's is ranked as number one in the world for the richness of its interior decoration. It just should be looked at! Inside, there is a large iconostasis covered with icons all over. Most of the icons are mosaics. But you will not be able to tell they are! They look like original paintings after which they were made. And it took two masters one year to create only one square meter of a mosaic! This work is really elaborate and time-consuming. But the result is worth it! St. Isaac's is sometimes called "the museum of natural stone" for in its decoration all kinds of stones were used - 16 different kinds of marble from all over the world, malachite, lapis-lazuli, granite etc.

The walls are decorated with beautiful paintings made by the most renowned Russian painters - members of the Academy of Fine Arts, to the stories of the Old and New Testaments. The dome was painted by the president of the Academy of Fine Arts Karl Bryullov to the subject of "Virgin in Glory". Under the very roof in the centre of the dome a white dove is hovering casting divine light upon the astonished visitorsвЂ¦ There is much more to see and hear inside of St. Isaac's Cathedral which is now turned to a museum for everybody to admire. 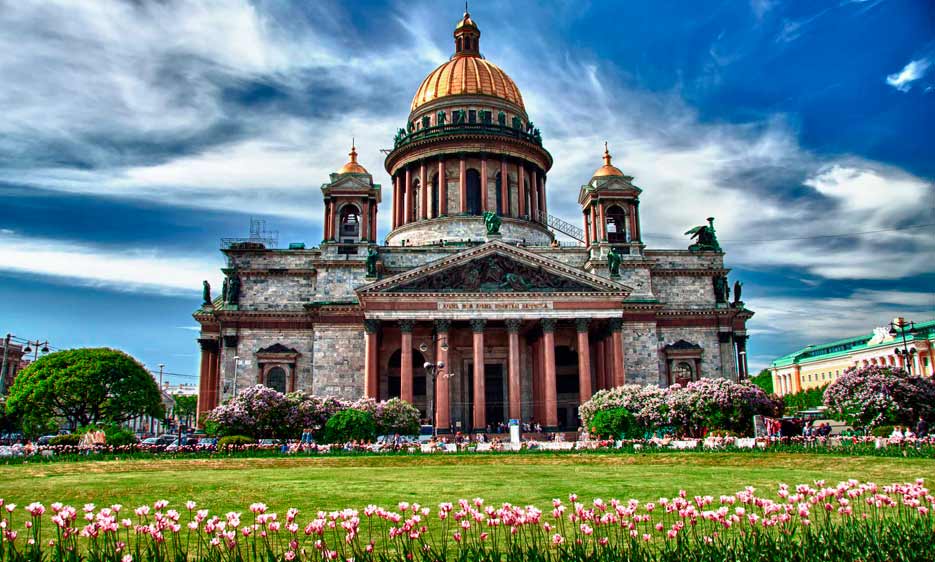