BACK IN USSR (MOSCOW)

"I'm Back in the USSR... You don't know how lucky you are, boy"... The Beatles sang this about 50 years back...
If you join this tour, you will have your own idea of what the Soviet Empire was like. The USSR is no more on the world's map.
Nevertheless, its ideas, achievements, its political and cultural legacy have immensely impacted the course of world history...
Where else but in Moscow can you fully immerse yourself in the atmosphere of the Soviet Era?


"Back in the USSR": the Soviet Legacy tour of Moscow


Day 1
Arrival at Moscow, the capital of the former USSR, where the traces of its Communist past are still visible and hugely impressive.
Transfer from airport to hotel of stay
Rest of the day at leisure 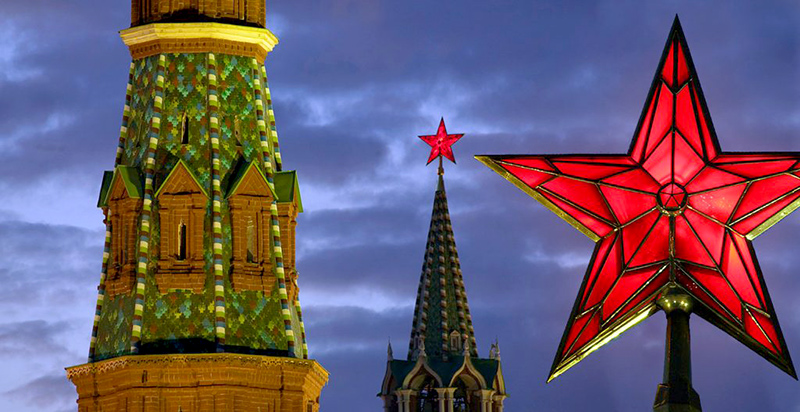 Day 2
After breakfast, we set out for a half-day city tour, providing an excellent introduction to Moscow's landmarks. You will see the Lubyanka Square with the former KGB headquarters, Tverskaya Street (former Gorky Street, named after the main proletarian writer Maxim Gorky), admire the famous Stalin's "Seven Sisters", the first and only Soviet-era skyscrapers, drive along Kutuzovsky Prospekt with its prestigious apartment buildings, previously nestled by the Soviet elite and the Communist party nomenklatura and more. A city tour will finish at the most symbolic place of Moscow - the grand Red Square - you will walk on its famed cobblestones and feel the heartbeat of Moscow.

In the afternoon, you visit Moscow Metro, the most impressive subway system in the world. The grandeur of the so-called "People's Palaces" was meant to be a showcase of the Soviet Union's achievements both for Soviet citizens and foreign guests. The stations are all uniquely designed with decorative elements including mosaics, chandeliers, marble floors, walls, and staircases, utilizing semi-precious stones and sculptures. 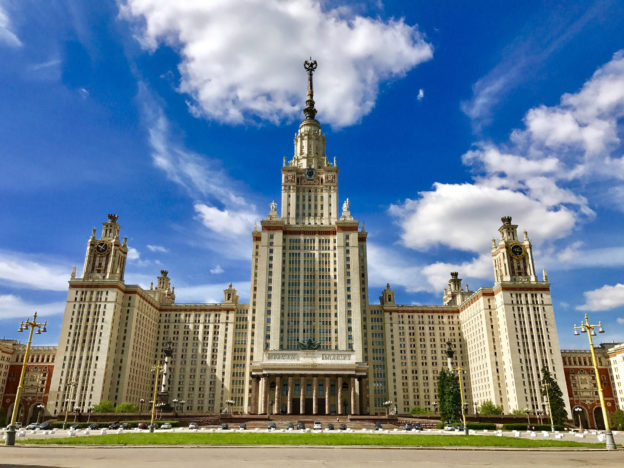 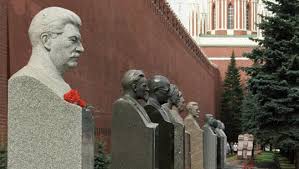 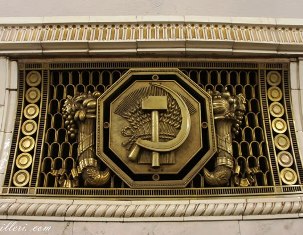 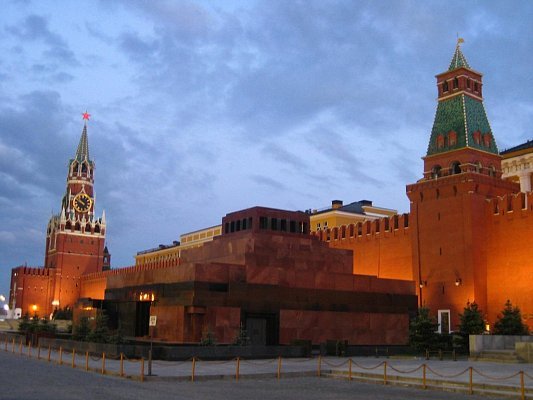 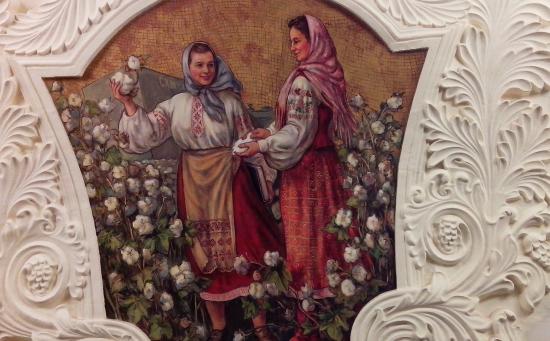 Day 3
In the morning, the highlight of our tour is awaiting for you. Once kept as a top secret facility, the Taganka Bunker or "Bunker 42", nowadays turned into the Museum of Cold War, located 65 meters under the ground.
Entering into one of the most secure Soviet-era bunkers, you will discover how the USSR prepared itself for a nuclear attack. The bunker was completely outfitted with food storage, fuel, air regeneration and vent filter systems, all that allowing the personnel to survive for several months. Strategic location in close proximity to the Kremlin was a core factor to ensure Stalin and other members of the Soviet government would get to the bunker faster, in order to rule the country in safe conditions. An interactive program conducted by a museum guide (or ex-KGB agent ?) to be recommended for those curious visitors, who look out for a thrilling experience to turn back to a time when the world lived on the constant brink of nuclear annihilation. NB! Not recommended for claustrophobes.

Later in the day, the guide will take you for the tour to explore the VDNKh.
The Exhibition of Achievements of National Economy (in short VDNKh) is a magnificent park and one of the iconic places of Moscow. It was among the Soviet most ambitious projects - a grandiose All-Union Agricultural Exhibition (by its first name, opened on 1st August, 1939) with gilded fountains and state-of-art pavilions and palaces representing most of the republics of the USSR and, of course, space exploration.
The VDNKh celebrated its 80th anniversary in August 2019. Large scale reconstruction began in 2014 (practically finished by now) and was aimed to revive its glory and make it one of the top attractions of the city for younger generations. A great place to roam around and to marvel the masterpieces of the Soviet monumental architecture. 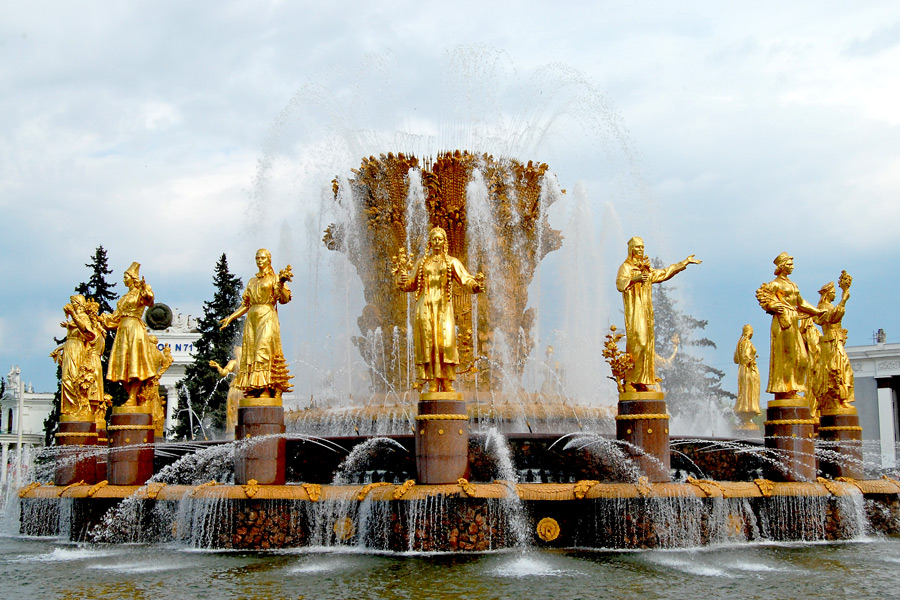 Day 4
Today's tour will be devoted to the study of Arts. The best place to explore the Soviet time art is the New Tretyakov Gallery on Krymskiy Val, the modern division of the State Tretyakov Gallery, which houses the collection of the Russian and the Soviet 20th century art: avant-garde, socialistic realism and modern art.
Here you will see paintings by world-famous artists such as Kazimir Malevich, Vassily Kandinsky, and Marc Chagall, as well as other heavyweight names, less known to the western public. Consider this visit as a history lesson which brings you a true insight into the Soviet era as the long and complex process, full of difficult and contradictory attitudes and ideas and stages. 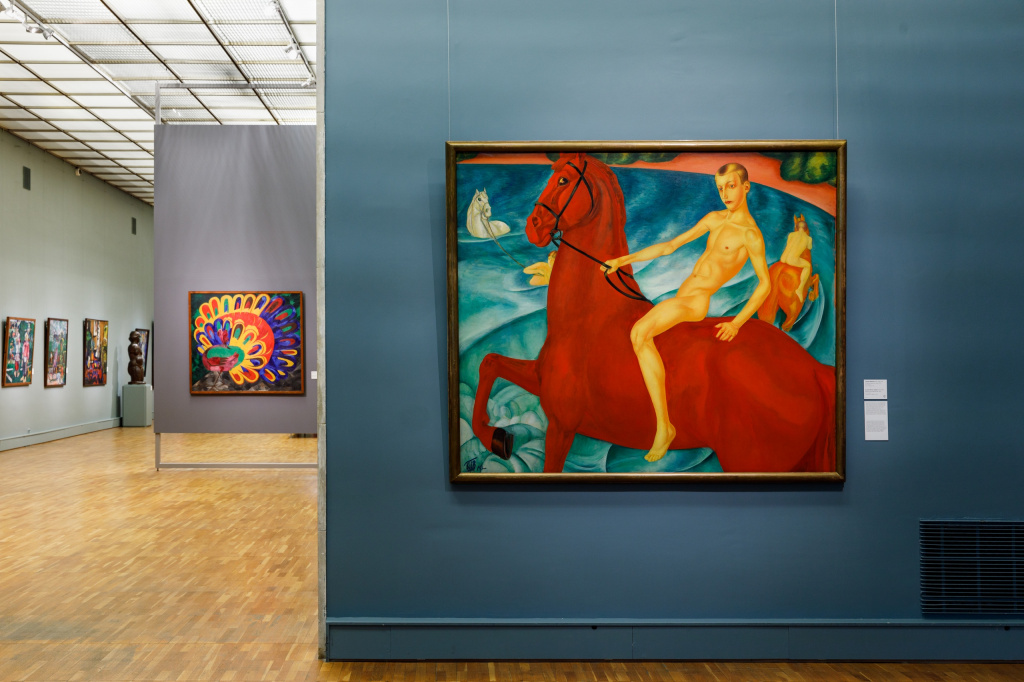 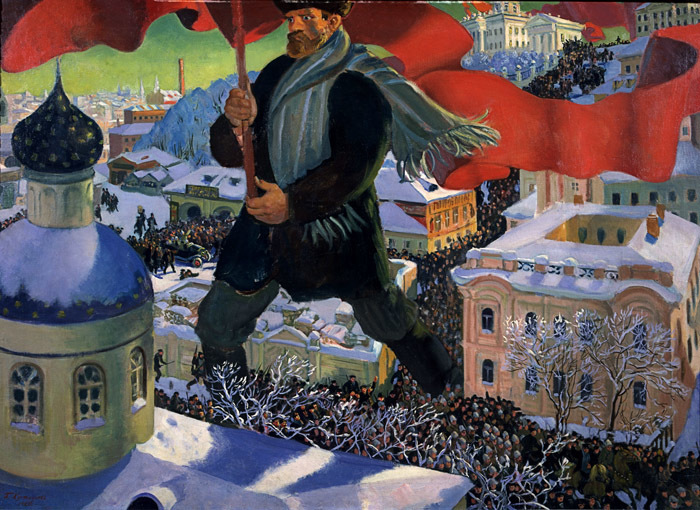 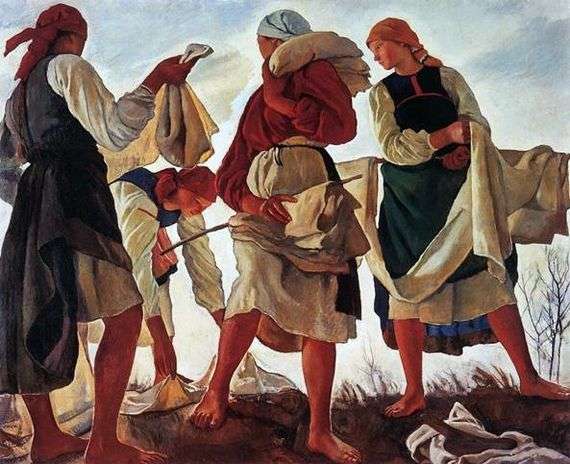 After the museum tour, our guide will take you to the Muzeon Park of Arts (also known as the Fallen Monument Park), just outside the Kymskiy Val building.
In October 1991, when the Soviet Union collapsed, many of the statues of the former Communist leaders and unidentifiable workers and peasants were removed from their pedestals, hauled to the park and left in their fallen form. After the Muzeon park was established by the decree of Moscow Mayor Yuri Luzhkov in 1992, gradually the statues were hoisted to their feet and arranged throughout the park.
While strolling through the sculpture park, you'll see the mutilated busts of Stalin, as well as those of Lenin and a statue of Felix Dzerzhinsky, the founder of the USSR notorious secret police known as the KGB. There's a massive Soviet coat of arms, and clusters of modern art contrasting with the very non-conceptual Communist monuments. 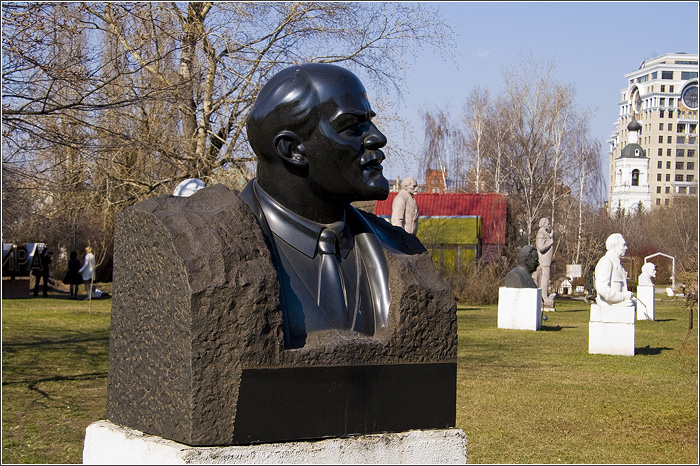 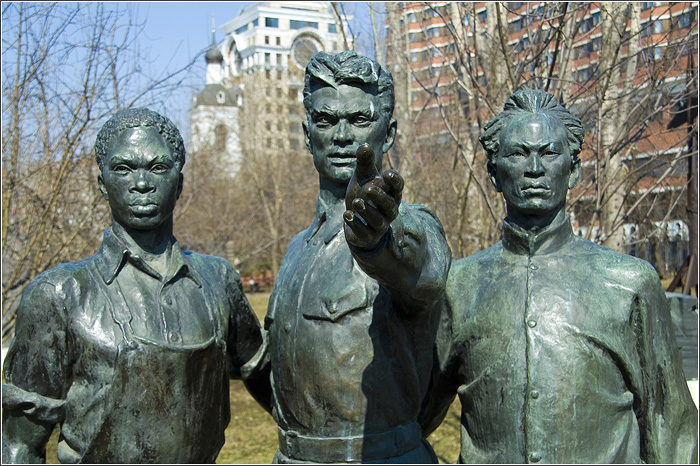 Day 5
After breakfast, check out from your hotel.
Free time for self arrangements or taking an Optional tour (if your flight timings allow).

OPTIONAL: Visit to the Museum of Great Patriotic War (the World War II Museum).
Opened on 9th May of 1995 to commemorate the 50th anniversary of the Great Victory in the 2nd World War, it became one of the largest military museums in Russia. The museum's collection holds unique archival documents, weapons and uniforms of the belligerent armies, the banners of the USSR  - over 50 thousand exhibits in total. Highly recommended are the six dioramas dedicated to the key battles of the Soviet Army and the Nazis (with excellent explanations of the scenes in English). Outside the museum, there is a huge open air exposition of more than 350 models of weapons and combat equipment... If you want to better understand the heroic role of the Soviet Union in the defeat of the Nazi Germany and the enormous losses the USSR suffered, this museum is a must visit. 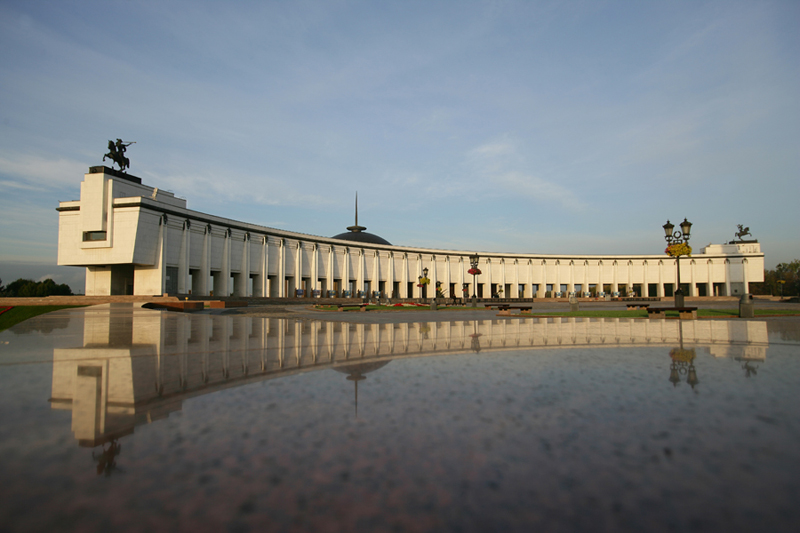 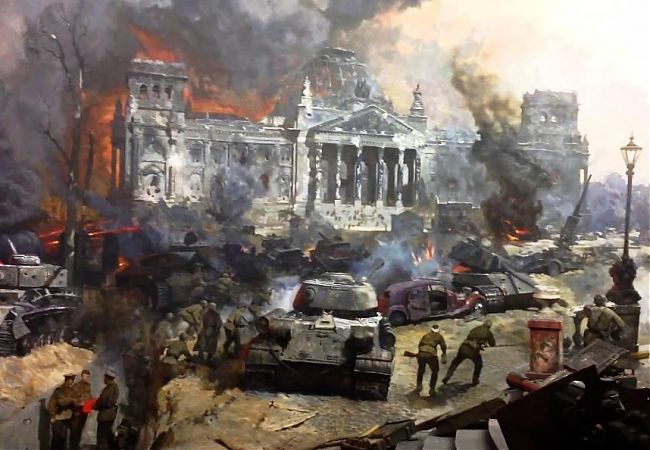 Later transfer to the airport for departure flight back home.
Farewell, dear Comrade!
Until next time ! 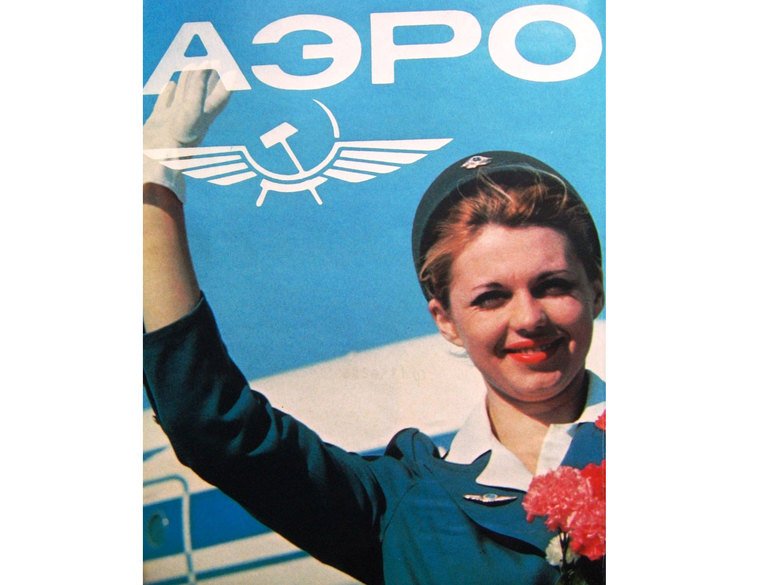 Christmas and New Year in Moscow

Best of Moscow for Second-timers

Back in USSR, Moscow

"Puzzles" for tour operators to diversify the programs !